Volcanic activity of Mt. Etna during 1966 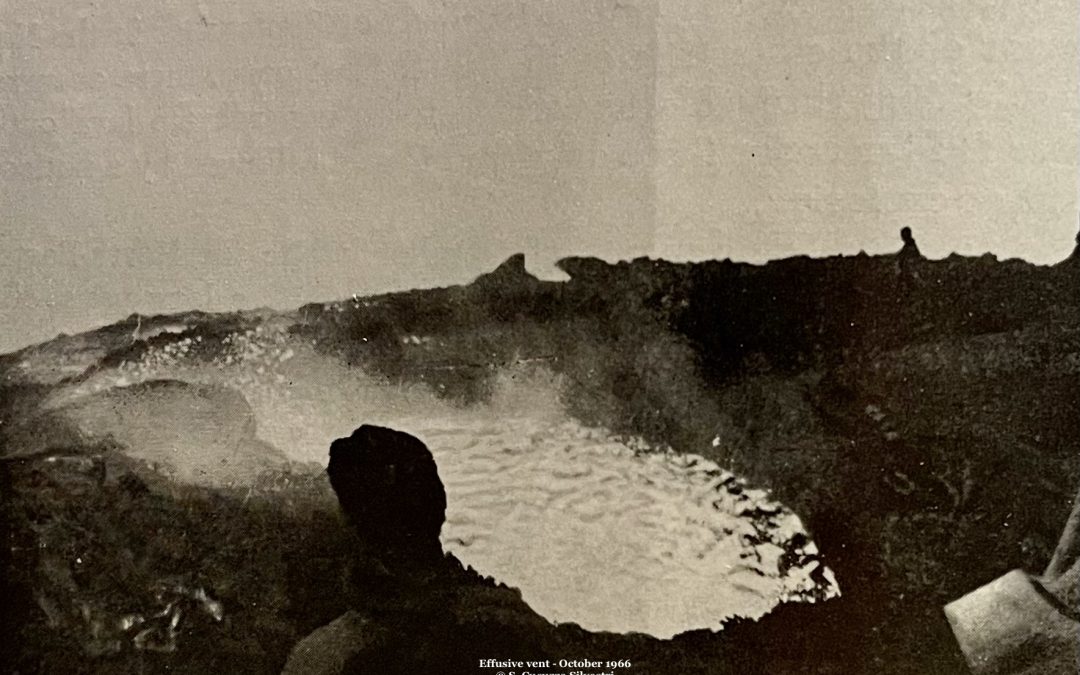 After the strong explosive and effusive activity in 1964, that reached its apex in the terminal eruption on the fourth of July (5, 6,13), the central crater of Mt. Etna and the subterminal North-East crater maintained for many months a state of relative calmness: from the big pit in the central crater came forth whitish vapours, sometimes blackened by a little coeval debris, while the numerous fumarolic fields on the rim and on the crater platform continued to be rather active. At the same time the North-East crater presented only slight fumarolic activity, and so the occlusion in the principal vent persisted.

At the end of the first decade of January 1966 some signs of the renewal of subterminal activity started with some subsiding on the bottom of the North-East crater cavity and with the opening of new fissures ; through these came out moderate hurlings of volcanic non-coeval debris, carried up by magmatic gases that sometimes escaped with some violence.

The complete re-opening of the North-East pipe occurred on the 11th of January with the appearance of pyromagma (magma rich in gas) in the principal explosive vent of the cone and it was followed by rhythmical emissions of great quantities of gas, that also dragged up scoriaceous lava spat-ters, lapilli, and volcanic non-coeval sand.

The issue of pyromagma in the pipe continued in the following days and on the 13th of January an overflow came out from the rim of the crater, with the formation of a thick lava stream that flowed for some hundreds of metres in a North-West direction and was fed for more than two days.

On the 16th a magmatic penetration in the connection of the same North-East cone reached the surface in the North-East sector at the base of the same cone and, at the height of about 3080 meters formed a subterminal effusion of epimagma (degassed magma) of moderate dimensions, and was maintained for several months. The effusive orifice that was produced had moderate dimensions, and it presented all the characteristics of a real called in Italian : “bocca di forno”, a little more than one meter wide. The lava poured out with a quite moderate starting speed, but sometimes it let out gas and vapors with some violence, enough to hurl around small lava spatters, and in a few days their accumulation built up a small spatter cone with steep slopes, formed like a hornito. The subterminal lava stream, formed in this way, reached, on the 17/4 of January, the rim of the close-by Valle del Leone, about 1.200 meters. from the North-East crater. In the second half of the same month the motion of the front began to slow down noticeably, while superimpositions and numerous accumulations were being formed. The explosive phenomena in the NorthEast crater reduced their intensity for some days, only to increase in the beginning of the next month of February. From the second half of the same month they were quite constant, with slight fluctuations . The periods of stronger activity occurred towards the end of February, about the middle of March, towards the middle of June, in the first ten days of July and September, in the first half of November and in the beginning of December. The amount of subterminal lava outflow kept quite constant till the beginning of June, even if it did show a noticeable fresh outbreak from the 29th of March to the 3rd of April. The lava stream which was formed in this period, reached a maximum length of 2,5 km, that is from the base of the North-East cone to the margin that separates the Valle del Leone from the nearby Valle del Bove. It was characterized by a starting stretch formed of 3-4 principal branches, of an average width of about 30 metres each, followed by a much wider stretch, formed of noticeable expansions produced by the accumulation of numerous lava branches. On the whole, the second front of this lava stream reached a total width of 7-800 metres. Its front part was characterized by five principal fingers that flowed to the bottom of the Valle del Leone, where they stopped, forming small irregular flow-domes. During the first days of June another lava effusion came forth in the northern sector at the base of the North-East cone through a new little subterminal mouth, which opened at the height of about 3070 meters. On the sixth, seventh, eighth and ninth of June the new subterminal outflow, after having formed a lava stream of about some hundred meters, exhausted itself, only to start again on the first of July, and it kept quite constant to the end of September.These new effusive subterminal phenomena were characterized by more or less long pauses and sometimes they lasted up to four days.This was probably due to the fact that at the same time the subterminal lava effusion continued in the North-East sector. Here, on the other hand, the quantity of lava sent forth from the eleventh of June to the thirtieth of October was rather small and much less than that sent forth in the previous months.

Towards the end of the first ten days of September in the Northern sector of the crater rim of the North-East cone, there occurred a slight subsiding through which came forth a moderate lava outflow that was fed for about three days, and it was followed by a noticeable renewal of explosions.

However, in the Central crater the state of the rather moderate emissive activity of gas and vapors continued and only a weak explosive episode took place, with the sending forth of debris and volcanic coeval sand, towards the end of June and irregularly in July, in August and in September.

We must add that during the year 1966, there was no important seismic phenomena that affected the zone of Mt. Etna, if we exclude some earthquake of I(Scala Mercalli), recorded on the various dates by the meteorological-seismic Observatory of Acireale. A shock of II-IlI was also felt on the 16 of November in the zone of Monacella – S.Venerina – Linera (between Giarre and Zafferana) in the low Eastern slope of the volcano.

In May (17), in August (8) and in September (15) some temperature measuring and viscosity determinations of subterminal lava, flowing at the basis of the North-East crater have been undertaken.Mineralogical and petrographical researches on the volcanic rocks produced during this year have been undertaken by TANGUY (14, 16) and by CORSINI (3). To conclude, therefore, in the year 1966 there occurred on Etna explosive and effusive subterminal phenomena of a moderate intensity.The explosive phenomena started on the tenth of January, lasting throughout the whole year, and continuing in the next year, 1967.The lava outflows originated from the same crater rim of the North East cone (13-15 January and 9-11 September), from subterminal sources which opened on the North-East sector (16 January-25 December) and from the mouths of the Northern sector (7 June-31 December).

These subterminal effusions were characterized in three different periods, precisely thus: the one on the North-Eastern sector was more intense in the first period (from the 16″ January to the 6′ June), while it was noticeably less active in the second period (from the 11″ of June to the 30 of October) and even less active, with long pauses, in the third period (from the 16″ of November to the 25″ of December); the subterminal effusion of the Northern sector was characterized by the following three periods: 7-11″ June, 14 July-1″ October, and the 31 October-31st December, with a medium intensity increasing from the first to the last period, that is in contrast to what happened in the subterminal outflow of the North-Eastern sector. The explosive and gas-escaping phenomena in the central crater were moderate.The seismic peripheral phenomena have very little importance. Definitely, we can say, however, that the activity of Mt. Etna in the year 1966 is recorded in the frame of the volcanic phenomena, explosive-effusive terminal and subterminal of the slow and persistent kind.

Recipient Code: T04ZHR3 (the second character is a zero)